Reviews of our Basses

There are still bass fans who are willing to dig deep into their pockets for an exceptional instrument. The bass we tested from this category is a Lakland four string instrument, and although it is the more modest standard model, its price may take your breath away. Without any ifs, ands, or buts, one can demand the very best from that produced in this category. However, one should not be fooled by the simple Fender or Music Man like optics, which are characteristic of this four-stringer. Without question, the Lakland reaches the highest level of quality and is made with the best woods. Basically, there is a four and a five string model; either can be ordered in a fretless version. The five stringer has a somewhat elongated 35″ neck for better deep tone rendition (the four stringer has a 34″ neck). Standard and deluxe editions differ concerning the work on the body. The standard edition has a plain body while the deluxe edition has a flamed or quilted maple top.

CONSTRUCTION
The neck is connected to the body with a stable five-point mounting and is constructed in a single stripe out of specially selected first-class maple. Here, however in contrast to the traditionally Fender or Music Man design, first-rate maple was used which promises a more direct appeal and a sustain very rich in overtones. These characteristics are strengthened with graphite strands which are part of the neck.

“Without question, the Lakland reaches the highest level of quality and is made with the best woods.”

There are three types of wood available for the fingerboard: Birdseye Maple, Rosewood, and Ebony. Our test bass has a fingerboard made of Rosewood onto which are mounted 22 relatively thin fret bars. The bass strings are constructed with relatively thin wire since experience has shown that thinner wire produces fewer playing noises; yet, one must also expect a somewhat shorter durability. The Lakland frets are carefully rounded and perfectly polished at the ends. The location markings on the flank and front side neck consist of light maple or Birdseye maple.

If the body is of the usual two-piece construction, one could not tell the with the Lakland, even after the closest examination. The beautifully grained body made of swamp ash appears as one piece. The two-toned, high gloss transparent varnish is of the best quality. The back of the neck was sealed with a tung oil finish. The perfectly manufactured four stringer appears to be of conventional and proven construction. Therefore, the overall improvements, tonal technology, and advanced design features (such as the neck construction) are not readily apparent. 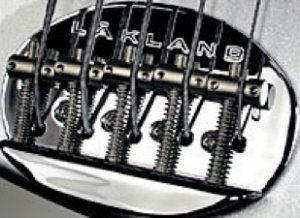 Open voice mechanics fit well with the style of the instrument. Modern and first rate precision types by the company Hipshot were selected for that. The bridge has adjustable closed holders made of refined steel-separate in height and purity of octave-with its base screws fitting into grooves of the thick tin baseplate. Thus, they are secured against moving sideways. The strings can be threaded either from behind through the body or from the front of the bridge. Strapholders permit the usage of normal slings as well as adjustable Dunlop straps. The chrome hardware of Lakland is vintage style, but without any doubt has modern quality and precision. 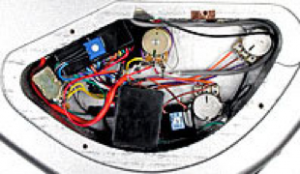 Lakland uses an interesting pickup system which consists of a big MM Humbucker in the bridge position and an additional J-PU near the neck. Both passive pickups work free of interference and are built by Bartolini for Lakland. Versatile sound is possible through the choice of three basic sounds (neck spool/parallel/bridge spool) for the MM humbucker on a special switch. It has to be noted that the pickup, even in the single-coil position, does not transmit any interference whatsoever. MM and J Humbucker can be mixed without gradation with the help of the special blending regulator. The master volume control has a special integrated switch thus enabling the bass to actively select three band EQ or remain passive. The electronic compartment was fitted with a copper lining of utmost and complete accuracy. The complicated wiring is neatly executed. The sound regulating module (NTMB-L) as well as the pickup are produced by Bartolini and can be widened by means of two fused extra building blocks which permit the user to pre-select four different center frequencies for the middle regulator. On the inside of the E compartment a drawing is affixed to the lid explaining how to set middle frequencies of 250Hz, 500Hz, 700Hz or 850Hz on a little miniature switch. With a “Trim pot,” the beginning sound can be adjusted in such a way that by switching to passive, no jumps in volume of sound occurs-or it does if so desired. Consumption of current of about 7mA continuous current is rather modest considering the expansive circuitry and promises a long life for the 9 volt battery.

A four stringer in this price category should be extremely, easily, and comfortably playable. This can be documented exactly in every aspect of the Lakland; most notable are the perfect balance and the very relaxed play position. The neck has a rather V-shaped profile, the strength of which makes a slender total body possible without any sound disadvantages. Although the neck seems to appear distinctly slim in the hand and can be handled with a noticeably small amount of strength, the fret board offers enough space for clean fingerwork. In the 5,000 mark price category, one should expect a high end string retainer with rollers which result in less friction at the spot where the strings are held down at the headboard. Here, the Lakland has been fitted with a much too plain, standard part.

Over standard four-stringer distinguishes itself with a tone of excellently refined, filigreed, and rich quality. It presents itself as an absolute top instrument which one may demand anyway. The frequency response is extremely broad and without any obvious tones which would put the bass into a certain style category. Nevertheless the clean tone with its differentiated and sustained ease appears not at all to be without soul or even harsh but a charmingly throaty character with velvety yet precise appeal like a highly polished Fender-jazz bass sound of high end style. With the three-way-switch on the MM Humbucker refined sound nuances can be achieved which can be most effective in conjunction with the open sound characteristics. Together with the possibilities of mixing which are available between MM and J-PU the Lakland offers an extreme tone diversity which many active basses with e.g. can hardly deliver especial by with such a refined rendition. The triple tie EQ has been tuned extremely well to the basic character of the instrument and offers the users harmonious and voluminous possibilities of variations, which of course can be tuned extremely well to one’s own personal taste thanks to the various pre-selectable middle frequencies of the middle ratio. You can feel and hear all these exceptional qualities of this four-stringer much clearer than this dream bass could ever reveal. It supplies an abundance of extremely rich sounds-and is an impressive know-it-all with a basic sound that is always characterized by its highly filigreed qualities.

A “plain” four-stringer of this price category can of course appeal only to a very small group of buyers, especially since the first optic impression is that the standard Lakland really does not look that expensive. Nonetheless, the woods are certainly first quality, the instrument is perfectly manufactured, and it is excellently equipped. The highly comfortable, relaxed feeling when playing it represents a suitable equivalent. Finally, those far reaching excellent sound qualities allow this expensive dream instrument to appear in its proper light. The differentiated, highly refined, yet broad banded sound of strong character of the Lakland make such a powerful impression that you could actually be so unreasonable as to rob your account at the bank to purchase such a “simple” four-stringer.