Getting a signature Lakland model is kind of like getting inducted into the Bass Hall of Fame. We don’t do it often and only for the truly great players. Past Lakland Signature Artists have included legendary players such as Duck Dunn (USA Series 44-64 Custom), Joe Osborn (USA Series 44-60), and Bob Glaub (USA Series 44-64). And even though the signature name may retire, the great basses created with them live on as part of our permanent line. From Geezer Butler to Tetsuya, today’s group of Signature Artists have helped us create some of our very best instruments and we are proud to have them represent Lakland. 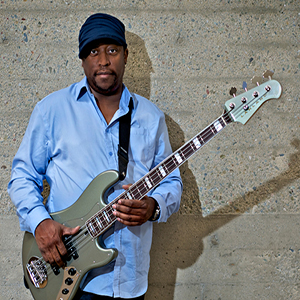 If you know Darryl’s discography, then you know he plays with the heavyweights…Miles Davis, Sting, Madonna and, of course, The Rolling Stones. So the man knows something about bass. And he definitely had something in mind when he came to Lakland…

In 1985, Darryl commissioned a custom bass from Albey Balgochian. What began as a business relationship evolved into a deep friendship and their collaboration on the Darryl Jones Signature Model Bass. Darryl and Albey came to us to produce their design because they were sure we could deliver this modern vintage style bass – not just to Darryl, but to players worldwide.

The Darryl Jones Signature bass looks similar to our 44-60 and 55-60 models, but has more curves to its contouring and dramatic cutaways that add to its vintage styling. Darryl’s bass is fitted with a pair of passive single coil pickups specially designed by Lakland. Three knobs control the tone: Bridge Volume, Neck Volume and Tone. And we added some really cool stuff like a pick guard, blocks on the fingerboard and a beautifully bound neck. 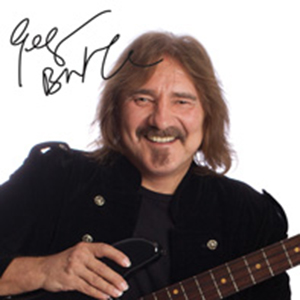 Terence Michael Joseph “Geezer” Butler is an English musician and songwriter best known as the bassist and primary lyricist of the heavy metal band Black Sabbath. He has also recorded with Heaven & Hell, GZR, and Ozzy Osbourne.

Butler lists Jack Bruce of Cream as his biggest influence as a bassist. Butler is noted as being one of the first bassists to use a wah pedal and to down-tune his instrument (from the standard E-A-D-G to the lower C#-F#-B-E), as exemplified on Black Sabbath’s Master of Reality album, to match Tommy Iommi who had started tuning his guitar to C# (a minor third down).

Butler is regarded as one of the most influential bassists in heavy metal. Billy Sheehan of Mr. Big said: “He’s a founding father of a whole genre of music and a man who really set the bar early on to be such an integral part of the sound and song structure of Sabbath”. In Mick Wall’s biography of Iron Maiden entitled Run to the Hills, founder Steve Harris recalls: “I distinctly remember trying to play along to Black Sabbath’s “Paranoid” – at first I just could not get it. I threw the guitar on my bed and walked out in a huff, but the next day I came back, picked it up and played it all the way through note-for-note! Once I got going, I started getting into bass-lines with a bit more subtlety to them…”.

Former Metallica bassist Jason Newsted, who defined him his “number 1 influence”, stated: “All true metal bassists look up to Geezer as a pioneer and Godfather of our chosen instrument. The best, ever”. Rex Brown of Pantera and Kill Devil Hill asserted: “He’s a legend. He’s everything. Geezer is so much of an influence on me.” Other bassists such as Cliff Burton, Les Claypool, Steve DiGiorgio, Alex Webster, John Myung, Johnny Lee Middleton, and Greg Smith have cited Butler as a significant influence on their style.

Geezer’s been a Lakland enthusiast since the early 2000’s, long before he worked with Lakland on his signature model. Here’s a partial list of some of the Laklands Geezer has played:

USA Series 44-51M with a split coil, white with black pickguard and a GZR sticker in the bridge

Custom Lakland USA Series 44-51 bass in Aston Villas colors (seen during the performance of Paranoid on “The End of The End” DVD). 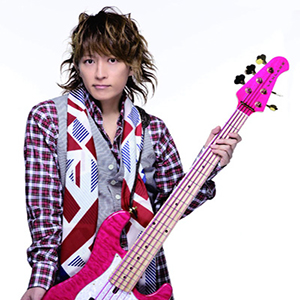 Tetsuya is a Japanese musician, best known as the leader and bassist of the rock band L’Arc-en-Ciel.

Tetsuya plays with a melodic style. Many of L’Arc-en-Ciel’s songs involve him playing counter melodies with guitarist Ken while still holding a groove with the drums.

The Lakland USA Series 55-69 Tetsuya Signature Model bass is the result of an exciting collaboration between the Japanese bassist Tetsuya, ESP and Lakland. The Tetsuya model features a 3-band custom designed preamp with coil tap, a quilted Maple top over a Swamp Ash body and Lakland’s legendary 35” scale for tight, deep bottom. Early versions of the Tetsuya model features LED position markers that glowed pink on the fingerboard.